EnGo – Smart Solar Street light pole is made by   EnGoPlanet ,the  sustainable solar lighting experts   recently launched a stylish new street light pole product which can even be retrofitted.The attachable design is of a solar cylinder module which can be quickly and easily mounted on any suitable pole for easy installation and disassembly.

Using 6 slim solar panels, with a solar cell efficiency of up to 21.2%, fixed to a hexagonal frame, ensures that half of them will face sun light at any time of the day.

The off-vertical cluster arrangement of the panels makes them less vulnerable to high-winds, less likely to accumulated dust and grime, and easier to clean.

The energy is harvested by a Victron SmartSolar MPPT 75-15. Bluetooth enabled, SmartSolar MPPTs include features which protect the battery from being too deeply drained, and have intelligent dynamic charge algorithms which work with the seasons to ensure the battery will at least periodically be returned to 100% charge.

EnGoPlanet use their own high-quality Lithium batteries, making the unit suitable for off-grid applications where night lighting is required. EnGo – Smart Solar Street light pole can also be used where a grid connection is present – in which case the units will run from their own batteries except where long-continued spells of poor weather require a power supplement to be drawn from the grid. This option is recommended for locations which are often cloudy, or shaded.

Alternatively, grid connected poles can be supplied without battery. Energy produced by the panels will be sent directly to the grid. Savings of up to 80% are possible. 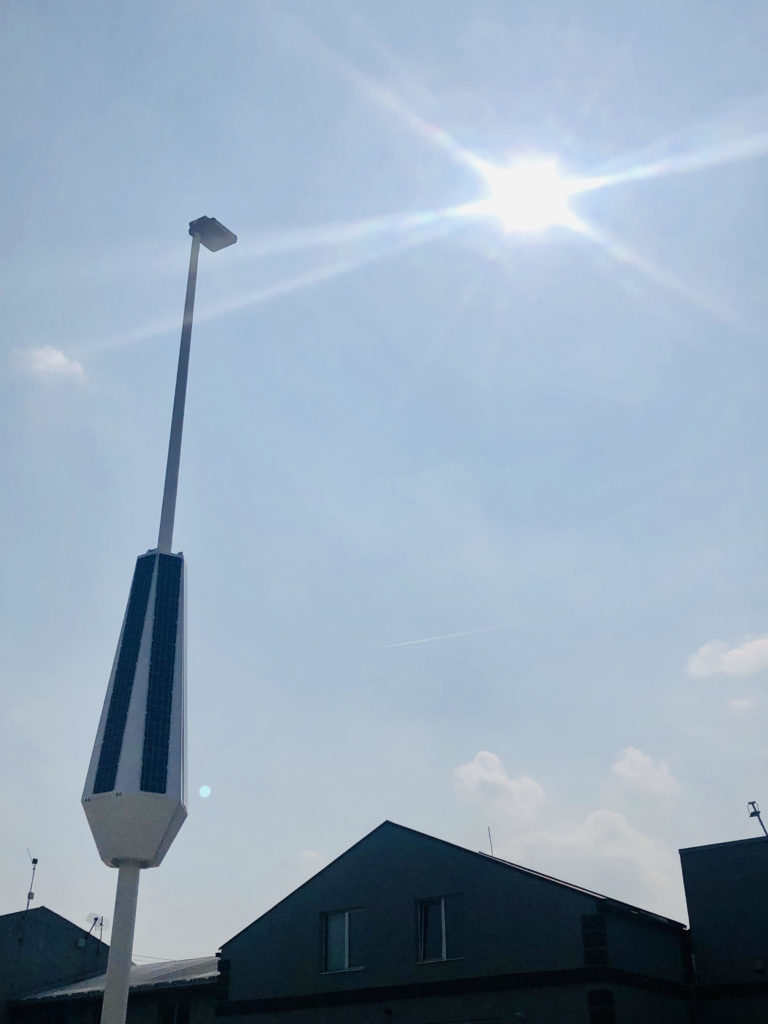 EnGo – Smart Solar Street light pole  installations are also able to collect valuable environmental data which can be interrogated online. Other applications for the poles are for uses such as CCTV, sensors, wifi hotspots, and even phone charging points.

When it comes to the buying decision for solar inverters, some buyers might be inclined to only look at pricing and spec sheets. While these are certainly buying criteria that should not be neglected, it is just a small portion of the bigger picture that needs to be looked at when choosing an inverter brand – because an inverter is more than what’s in the box.But why should you even consider Fronius Solar inverter?

As the solar inverter industry is becoming more commodified every year, inverter spec sheets are starting to look a lot more similar. Many inverter capabilities are driven by the same market requests and NEC code regulations, making features and pricing very similar across all inverter brands in the market. Therefore, a buyer could think that the only thing to look at is the price tag. However, it’s crucial to actually look past the spec sheet and the initial purchase price. When picking an inverter, you not only chose a piece of equipment, you are choosing a partner to work with for the next 20+ years. Thus, you might want to look into more than just “the box” and its price.

So what specific buying criteria is there beyond specs and price? The inverter is a critical component of a solar system, as it is not just responsible for DC to AC conversion, but also for the safety of a system, maximum power point tracking, grid interconnection and system monitoring. It is obvious that the inverter and its performance have a big impact on a system’s Levelized Cost of Energy (LCOE) and profitability – inverter uptime, operation & maintenance (O&M) programs and warranty matter in that regard, and this is where the company behind the inverter plays a crucial role.

When choosing an inverter partner for the long term, it is crucial that this partner is around beyond the lifetime of a system. Therefore, financial stability and bankability, as well as a global footprint with a local support infrastructure are key aspects to look at. There is no doubt that the fairly fragmented inverter market will see further consolidation, given the ongoing price pressure. This increases the risk of certain manufacturers going out of business and leaving both installers and system owners in the lurch.

Furthermore, an easy to reach manufacturer support hotline and personal, long-lasting relationships on manufacturer’s level help installers through the entire process from designing systems to after-sales service for 20+ years – ensuring uptime and quick service. Since all power electronics can fail at some point, customer-friendly warranty terms and an easy RMA process are making a big difference. Power electronics manufacturers from advanced industries even offer spare part kits among certifications for contractors to conduct repairs cost-effectively in the field and within one truck-roll – a big impact on the profitability of a system.

All these aspects make a big difference and cannot be found on a spec sheet or on the price tag. Make a smart choice. Do not just look at the spec sheet and the price tag, when picking your  solar inverter. It’s a decision that will impact you over the next 20+ years and you want to be sure that your considerations are aimed at this period of time too.That is why Fronius solar inverters is a great choice.

NOCHESKI – YOUR INVERTER PARTNER FOR THE LONG TERM

Fronius has been in business for more than 70 years and shows a proven track record of long-lasting customer relationships and ongoing support for every product ever shipped. The company is privately held and cash operated, providing highest bankability. Fronius business is based on three independent business units which focus on completely different industrial sectors (Welding, Solar, Battery Charging) – yet they are based on a common technological focus on energy conversion. The Fronius 24/7 Service Solutions for inverters include online monitoring, Solar Online Support around the clock and the Fronius Solutions Provider program, a network of certified installers with direct access to Fronius.

To learn more about the Fronius Solar Solutions, contact [email protected] today or call 0244270092 to speak to our product specialist

The recently constructed Mother and Baby Unit (MBU) at the Komfo Anokye Teaching Hospital in Kumasi has five different sources of power, namely national electricity grid (ECG), backup battery bank, the KATH’s main generators, the facility’s own generator and a state of the art Grid-tied solar power system.The MBU’s power system is configured to prioritize solar as  the main power source. In the heart of the solar design is a 3 phase 20Kw Fronuis Symo inverter. Grid-tied solar power systems dont require batteries and are  the most cost effective to install.

Why The Fronuis Symo Inverter ?

The installed solar power system is expected to save the hospital at least  U$D 50,000 in electricity bills over the next five years.The savings could be utilized by other operations of the facility such as drugs,salaries and vehicle  maintenance.

Ghana has The only Green hospital in Africa

polycrystalline solar panels installed on the roof of KATH,Kumasi

The USD 2.5 million ultra-modern facility, built in a record of five months, was spearheaded by Mrs Akufo-Addo and her team at the Rebecca Foundation, following the Multimedia’s Seth Kwame Boateng’s “Next to die” documentary on the deplorable conditions mothers and babies who attended the hospital for healthcare were going through.The world class facility that had earned EDGE certification, from a group affiliated to the IFC/ World Bank, for being the only green hospital in Africa, covers a total build area of 2,722 square meters, with an internal indoor area of 1,724 metre square, instead of the old MBU that had 350 metre square.

The building, which would house the Maternity, Neonatal and Paediatric Intensive care and operating theatres of the Hospital, had been built to withstand earthquakes, fires and explosions and has temperature insulation and noise isolation capabilities.It also has been well equipped with nine birthing beds instead of the former two at the old MBU, with three operating theatres, 130 baby cots.

What can Ghana learn from this project ?

With 11 paediatric beds, two infant ventilators, filtered fresh air and independent post-delivery and post operatory rooms while the faucets, showers and toilets use low volume of water.The 2.5 million dollar facility is expected to help reduce the high infant and maternal mortality that is being recorded by the KATH over the years due to lack of space and hospital equipment.The First Lady Rebecca Akufo-Addo and her Foundation partnered The Multimedia Group and many other partners  to raise funds for the project.Nocheski Solar would like to congratulate H.E Mrs. Rebecca Akufo-Addo,Rebecca Foundation and all the project partners for investing in a Fronuis Grid-tied solar power system for the project.We believe this is worthy of emulation by other organizations  across the nation who may want to make enormous savings on electricity  in the future.Further enquiries may be made by calling a product specialist on +233244270092 or email [email protected]

Ghana:How Fronius saves businesses Ghc 24,000 per annum on electricity.The conversation was getting heated and it ended with the statement “Diesel Generators are cheaper than the Electricity Company of Ghana (E.C.G) and some businesses in Ghana run on generator power even when the grid is available”……………………..

The reality of Ghana’s power situation

This was what I learnt from a conversation I had in 2014 with an associate of mine who ran a medical practice in East Legon at the time.I was actually doubtful of his claims because of his political affiliation and therefore brushed these claims aside.

Whilst Ghana appears to have recovered, somewhat, from the power crisis, many businesses are, ironically, turning to generators which they find to be cheaper than the national grid. Fast forward to 2017 ,whilst running several power audits across Ghana ,I  come across several businesses who run on diesel generator power 2-3 times weekly as a cost cutting strategy for electricity. Some of these business claim to be able to save up to 25% on power costs by this strategy alone.

With Ghana’s prepaid metering system, it’s easy to compare how much is spent on either generators or the national grid on weekly or even daily basis .The bare facts are that  that solar  has gotten cheaper today than it was years ago and with an average 5.5 hours of effective sunshine daily in Ghana, businesses  should seriously consider quality Grid-tied solar power systems such as Fronius .With these solar power systems you don’t need to even worry about rising utility tariffs  or fuel prices.

A grid-tie solar installation ,showing solar panels on the roof of a Guesthouse in Ghana

Most Ghana based business shy away from Solar power because of the perceived high initial costs. Grid-tied solar often has fewer upfront costs than an off-grid system. For one, it can cost less to install a grid-tied system because it does not require batteries, as off-grid does. For another, it’s more flexible, as you don’t necessarily have to install the number of panels you will need to produce all your energy needs right away. people choose grid-tied solar power  systems when they know they could only afford a certain number of panels at a given time, so their goal is to lower their electricity bills—but not eliminate them entirely just yet.

Over time, you can always add more panels as you find the financial resources to do so.This solar power option is excellent  for  commercial operations that have a high power demand during daytime hours.Up to 65% percent of power demand for most offices in Ghana is for air-conditioning /cooling due to high daytime temperatures  and humidity.  Our research indicates that grid tied solar can be at least 45% cheaper than off grid solar power systems and you can save Ghc 24,000 per annum by the deployment of just 10kwp. We are able to calculate the savings because of the inbuilt monitoring systems in these intelligent devices built by Fronius BV of Austria.

Nocheski Solar is dedicated to using products  that have a strong, unrivalled reputation for technical innovation, reliability, and build quality. Our products are widely considered to be the professional choice for independent electric power.You may call +233244270092  email for further information