Solar Cloth:producing power from textiles everywhere .we always need to keep our eye on emerging technologies and how they may relate to our products, both now and in the future. Solar cloth is one such technology that has certainly got me excited. You can see the solar cloth panels embedded in the mainsail of the yacht above, which is ideal as deck area for conventional modules is limited on sailing yachts.

Solar cloth is not just for boats though. Yesterday I spoke to Alain Janet from solarclothsystem.com and learned that it can also be integrated into canopies, to provide power for outdoor events for example or indeed to recharge electric vehicles. Even an awning for an RV or overland 4 x 4 could probably use such a system too.

However, Alain is a sailmaker to trade and naturally it is in that field that his first system is to be deployed, with UK Sailmakers (France). The UK Sailmakers group has over 50 lofts and service centers around the world, so to my mind they are well placed to bring this technology to market.

Below is a press release, concerning these new PowerSails. 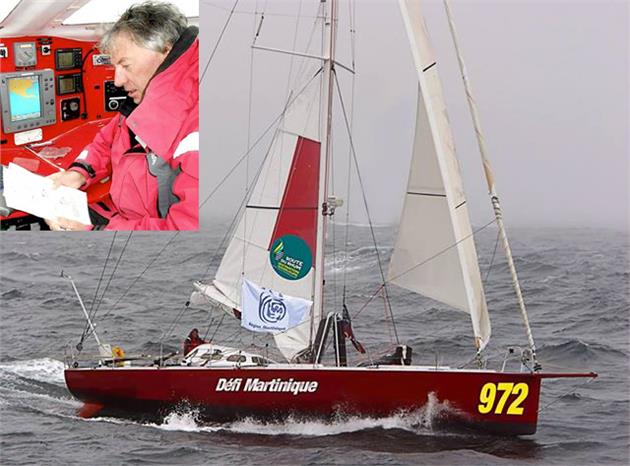 Frenchman Daniel Ecalard has entered his Open 50 DEFI MARTINIQUE in the 3,500-mile Route du Rhum from St. Malo, France to Guadeloupe in the Caribbean. His goal: to complete the race with zero carbon emissions. Ecalard plans to carry no diesel for generating electricity in a boat that bristles with electronics that do everything from communicating and navigating to making water and moving the boat’s canting keel.

He will use the boat as a test bed for clean energy solutions. His primary source of power will be solar panels laminated into his Titanium® mainsail to cover all the boat’s electrical needs. The sails are being made by UK Sailmakers France, which has developed the technology for solar cells that can be either laminated to new sails or affixed to existing sails. This exclusive technology is called PowerSails and is being developed by Alain Janet, owner of UK Sailmakers France.

These cutting-edge, light-weight films can generate electricity in low light and indirect sunlight. They are supple enough to handle the sail being luffed as well as folded. The panels will be put in the upper part of the main, above the third reef.

Janet says that the mainsail for DEFI MARTINIQUE is expected to produce on average 500 Watts per hour, budget allowing. Ecalard’s boat was built in 1998 for that year’s BOC race. In 2002-2003, Brad Van Liew won the 50-footer division of the 30,000-mile Alone Around Race by winning all four legs with this boat. She still holds the 24-hour distance record for a singlehanded 50-footer when she went 345 miles in a day. In 2008, she won her class in the Newport Bermuda race. In 2010 the boat starred in the Hollywood movie “Charlie St. Cloud” where Solar Cloth:producing power from textiles everywhere

Ecalard’s ultimate goal is to build a sailing freighter for working the inter-island trade in the Caribbean. For more information about this project go to: http://seafretcaraibes.fr/

Our thanks to Adam Loory of UK Sailmakers International for the interview and text above, with RDR (Route du Rhum) skipper Daniel Ecalard.

As a footnote, we also wish Alain all the best for his PowerSails project. And if there is a place for Victron to assist, then I’m sure we will as emerging markets and technologies are surely a key to business growth for all. So, if on your Victron travels you too come across something new, that is noteworthy of a post here on the Victron blog, do let us know.